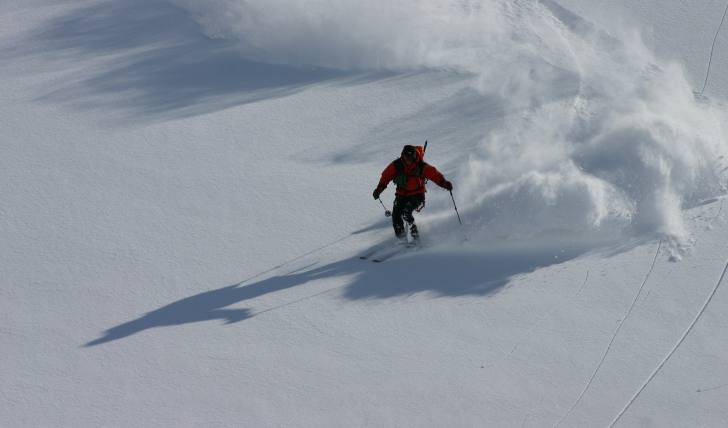 At an altitude of 1444m and with its less than 1000 inhabitants, Andermatt is one of the last original high alpine mountain-villages. Allready int the 13th century it was well known for its accessroads over the Alps. Gotthardpass to the south and Furka/Oberalp on the east-west-axis were important traderoads and brough wealth and power to Andermatt. You can still get a feeling of this era while visiting the great church in the middle of this tiny village.

After the Gotthardtunnel was build, most of the travellers went underneath Andermatt. When the Gotthardpass lost its importance as a traderoad Andermatt fell into a century long cinderella sleep. The grandhotels and infrastructure declined and some parts of Andermatt still have the charme of the 50s. The municipality bet on the constant source of income from the militarybase located here and not much thoughts or money was invested into the infrastructure or future. Therefore the village still appears in its original and a little bit sleepy way.

There has been a shift in Andermatt in the last couple of years. After some articles in skandinavian skimagazines and a lot of positive resonance in the internet, Andermatt has had a constant flow of powderfreaks from all over the world. A community of freeriders have been established here and more will come. Wide skis, cheap flighst within the Europe and the internet, have made these rugged mountains accessible to a new breed of mountaineers.

The special athmosphere here is obvious. Colourful skiers and traditional houses blend into a cool mixture. Both locals and foreigners will blend in here and enjoy Andermatt in their own way. Andermatt can not compete with other skiresorts when it comes to amount of lifts or kilometers of piste prepared. Its the home grown, original, less commercially exploited and regulated Andermatt what makes the difference.

Andermatt in the Winter

As soon as those steep, shady north facing mountains around Andermatt get covered with the usual meter thick snow, Andermatt becomes the meltingpot of powderfreaks from allover the world. Located right in the center of the ALPINE MAIN RIDGE, the protruding Gemstock-area gets hammered from the lowpressure systems regardless of their direction of travel. This means that Andermatt is one of the snowsecurest areas in the alps. The runs on the Gemstock are mostly northfacing. These shady, cold and steep runs will not see any sun until mid march. This means the powder will stay dry for a long time. Its not unusual to hit fluffy stuff even a week after the last snowfall.

For the sunbathers among us, Nätschen area is a good Alternative. Its got moderate runs with a modern liftsystem and a good connection with the MGB-Train to Sedrun and Disentis. Here are more runs for a relaxed day in the sun, family friendy skiing and nice huts and restaurants.

Andermatt in the summer and Autum

When the usual fog covers the valleys, Andermatt is enjoying the sun. Its a true playground for climbers, bikers and hikers. Drop by and have a look, its always worth to come here and enjoy the great outdoors.

The future in Andermatt

Great changes have always been in the history of Andermatt. Even if the tunnel made many people to forget Andermatt, this time it will be in the centre of  our attention. Even if only a small part of the project called :" New Andermat " will ever be built, it will start a new era here.

Basecamp Andermatt is a private mountain lodge in Andermatt, Switzerland.

We provide lodging for mountaineers right next to the sunny slopes of Nätschen. You can come by your self, book only one bed and share a room with other people. If you want more privacy you can also book all beds in one room.